You are a non-binary (They/He) college student 22 years of age. Whilst studying you have frequently heard people mentioning an anti-LGBT+ community, which you decide to visit with the goal of showing these people that the LGBT+ are actually nice and respectable people just like anyone else in the world.

He has this peacocking attitude, so he likes to be the center of the attention. When he is dating someone, he doesn't know how to express his feelings to his significant other. He has a good heart, even though he can be a little hostile towards strangers.

Madame DeLaGanza (not included in this version)

She is a true diva! Very extroverted. “She” when in drag, “he” when he is out of drag. She/he likes to party all night long! When it comes to throwing shade, she has earned her degree! She is a quick witted queen with a sharp sense of humor and while that may intimidate others, you know how to be kind and caring when necessary.

Sexual orientation: straight (as far as we know!)

A tough guy who is always up for picking on people that he considers "strange", especially the ones from the LGBT+ community. He may be struggling with his own sexual orientation. He does not know it yet , but he will eventually learn that he is not straight ni gay but graysexual (or assexual?)

(can become gay, but very unlikely)

She is a religious woman who has become very bitter after her husband passed away. She loves to garden, to watch soap operas. Her special hobby is to mind her neighbors' business. She is a very protective mother, accordingly to herself, so she is afraid that her son becomes gay.

(our choices will influence his sexual orientation)

He is Joy's son. He is just 20 years old and is still discovering himself. He is often interested in learning more about other cultures, other points of view. Since his childhood, he didn’t have a lot of contact with other children, because his mother would not allow it.

Emma  (not included in this version)

This woman is a bit particular. She says that she does not have any prejudice against the LGBT+ community. She has never ever disrespected anybody in her life, but she and her husband think that the LGBTs should keep their uniqueness or gayness to themselves. They think that it may influence the children from the neighborhood.

[Credits within the game.]

Will there ever be a windows version? 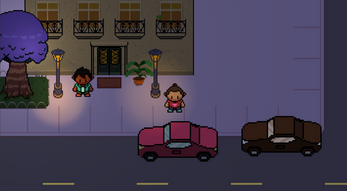